• In 1962 the girls received their 5th kyu (yellow belt). At that time Košice did not have qualified examiners, so Ing. Robert Binder came from Bratislava. He was the founder of Slovak judo, and now over 80 year old. For me the event was significant because we were told that Mr. Binder was a very charismatic gentleman. He explained to me that judo is primarily for intellectuals and that I chose my sport correctly (at one time in my life I seriously flirted with running instead).

• I couldn’t have chosen better that the 14 years I dedicated to judo. After 45 years I can say that objectively. It was wonderful to belong to a team of smart boys and girls that were considerate, independent and responsible. After all Kajo, our coach, was only two or three years older than most of us. It was the same in the men’s team. Kajo not only secured the training schedule, but all organizational, financial and administrative issues related to the sport – and later with the Regional Judo Association. Most issues were managed by the three Dusil brothers: Robert, Vašek (unfortunately no longer with us) and Karol. When problems escalated, some of us were asked to help. I was among them, as well as Igor Fridrich. I transcribed meeting minutes and various reports that were required by the totalitarian regime. When Robert went to study in Sweden in 1967, Igor Fridrich took over management of the Regional Judo Association.

• I was never a successful competitor, but that did not hinder me, as I felt at home with the team. Kajo was in charge of all women’s age groups and performance categories, and very soon I also began to participate in coaching duties. I taught judo throws and basics to hundreds of girls. Before reaching the age of 18 I became a judge and a class III trainer. These positions sat with me more than the role of competitor. Vašek Dusil was in charge of coaching the men, and when he had other responsibilities, I’d take over.

• In addition to the activities in Košice, we promoted and established judo in other towns across Eastern Slovakia. Erika Mešterová-Dusilová and I came from railway families; we had permanent rail tickets and would go and train girls at the Central Pedagogical School (Stredna pedagogicka škola) in Prešov. We were still in high school. Great promotional events were organized in Michalovce, Slovakia and we combined that with a trip to Vienna. Our accommodations were in someone’s garage. Guarding the boys from the girls was of course, Kajo. As part of TJ Lokomotíva we were allowed to travel across all of Czechoslovakia. We used that to great effect and attended many competitions. If the girls weren’t competing we simply accompanied the boys as fans and observers.

If you missed my previous posts on Košice Judo, you will find them here: 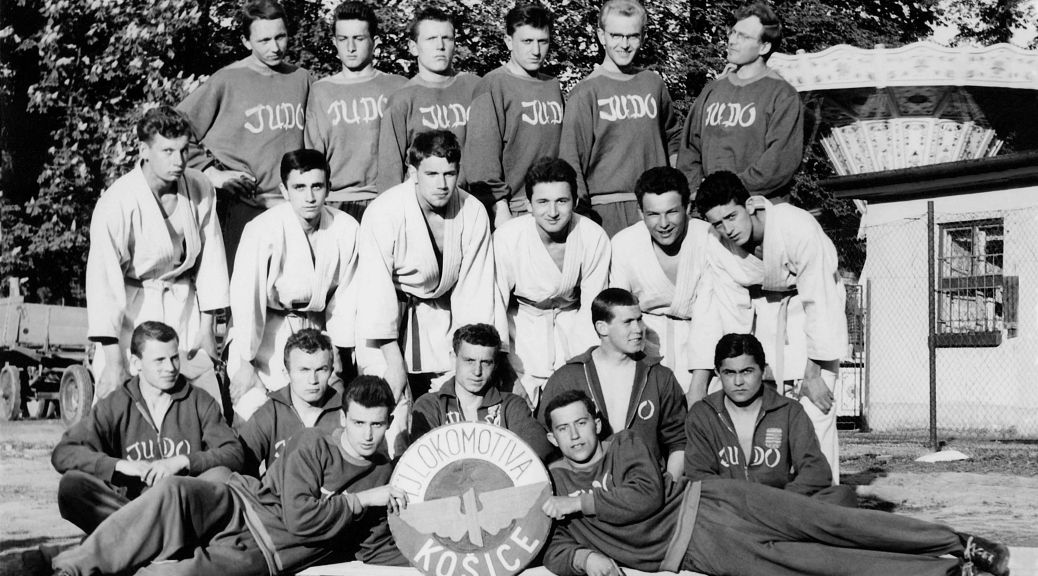 • I started judo in 1961. I was an economic student and my classmate and best friend Erika Mešterová persuaded me to try the sport. At the time our judo facilities were in a small building in Petrov Sad, Košice. We had to share the facilities with the TJ (Telovýchovná jednota) Lokomotíva Košice wrestlers and boxers. The room where we practiced was covered with soft mats, more suited to wrestling than for judo. The building wasn’t heated so in the winter when we came to train, the mats were covered with a layer of frost. We had to wear socks on our feet, otherwise our feet would freeze. In such cold facilities no one took it easy during training. Everyone wanted to warm up quickly with a lot of movement. After training we showered under ice-cold water.

• After completion of the indoor swimming pool in Košice in 1963, our building became part of the swimming community, so we no longer had a place to train. In early September the team organized a march in the center of town with a goal to find a new gym. The event was a success and for some time we rolled around in Room 4 of the Technical University’s dormitory on Vysokoškolska ulice (street). Later we moved to the school gymnasium on Gemerská street. We also bought our own mats, ordered by Robert Dusil somewhere in Bohemia. The training facilities weren’t only for judoka so we only had a few reserved hours each week. The girls needed to train with the boys. Men trained under the guidance of Vašek and Robert Dusil, and the girls were under the leadership of Karol Dusil. Each workout started with laying the mats and stretching the canvas.

• The following school year we moved to the Cadets facilities on Komenského ulici. There we had separate training from the boys, and never trained with them again. In later years we also trained on Podhradová. When I first arrived, the girls were trained by Juraj Mazánek, aka. Hoszu. After a short time he was replaced by Dušan Halász, who we called Marmot. When he departed to military service Karol Dusil took over. Kajo, as we all called him, gave his entire soul to coaching. The first championships titles for Czechoslovakia were awarded to Julka Tóthová in Nuremberg, Germany in 1962 (Unfortunately she is no longer among us). Next champions were Božena Glaubicova-Mikušákova and Hanka Demáčkova in Košice in 1966. The most successful year for women’s Košice judo was in 1967. The Czechoslovakian championship that year was held in Žilina. Winning in their weight classes were Juca Ujjobbágyova, Erika Tordová-Királyová, Valika Zelenayová-Záhradníková and Maja Polončáková. In 1968 in Prague, additional championship titles were won by Milka Kojecká-Mišková and Božena Glaubicova. Gold metals were also awarded to Marta Ujjobágyová and Magda Antolíková. At that time, Košice women’s judo was the best team in Czechoslovakia. In 1968 in Košice took first place in the unofficial national championships. Kajo trained the women until he immigrated to Canada in September 1969.

If you missed my previous posts on Košice Judo, you’ll find links to them here: