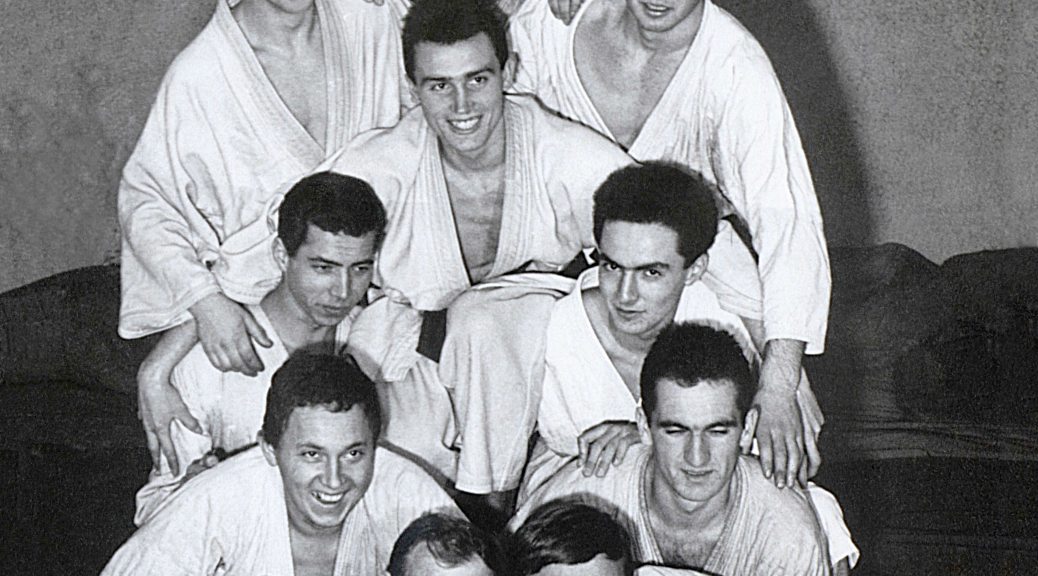 • Throughout the 1960’s, both the men’s and women’s judo teams in Košice were far more cohesive than the opposition. During competition they routed for each teammate with far more enthusiasm and passion. It was partially due to their deep routed friendships. Perhaps it was also due to the financial and physical hardships they shared. The team members spent a lot of time on trains – Košice is situated at the extreme East of Slovakia (Czechoslovakia at the time). So traveling from Košice to any tournament was lengthy and taxing. A trip to Prague was over 700 km and took over 11 hours. They would typically travel on overnight trains, and compete the day they arrived. A sleeping car was out of the question, because it was too expensive. An overnight train meant sitting on benches in a cabin that would hold up to eight people. The judoka learned to sleep on overhead luggage racks, or in creative places where there was a chance to stretch out. Friendships survived decades, including post-emigration, and continue to be strong today. Members often participated in many extra-curricular activities, such as hikes, camping, or going to the movies. Many teammates were best friends –  Karol Dusil, Pepo Vosecky, and Igor Fridrich were closest to my dad.

• Lokomotíva Košice was the rail company’s sport club. In the communist system, state factories sponsored various sporting sectors. So Lokomotíva had a sports organization spanning over 20 “oddiels” (translated as “sections” or “divisions”) – these oddiels were in judo, wrestling, boxing, European football, handball, basketball, etc. One perk for the judoka was relatively cheap travel costs. For instance, an express train ticket from Košice to Prague in the 1960’s would cost only 20 Czechoslovakian Koruna (around $1 American dollar in today’s exchange rate). That same retail ticket today costs €54 ($76 US$).

If you missed previous posts on Košice Judo, you can find them here:

• My dad tried his hand at boxing before seriously taking up judo. When I was a kid I  remember watching Mohammad Ali on television, with my dad growing up.  I also had the privilege to accompany my dad to the 1976 Olympics in Montreal, Ontario, Canada. We attending judo and boxing events.  I later learned that Larry Holmes had fought in one of them.

• This is the men’s Lokomotiva Košice team. In one tournament, Edo Novak scored a spectacular Ippon against the Czechoslovakian Champion Norbert Pomp using a Ura Nage judo throw.

• Robert Binder was the founder of Slovak Judo in Bratislava in 1954.  According to my uncle, he was a fantastic person and a great help to Lokomotiva Košice, and in the development of Košice judo.  He “belted” my uncle from yellow to brown. Joe Nalevanko coached Slavia Košice, the second Košice Judo team, consisting of mainly engineering students, but Lokomotiva Košice also retained him.

• In 1965 my dad, Pepo Vosecky, Igor Fridrich, Vlado Makovsky and Stefan Bartus went to Split, Croatia (Yugoslavia at the time). They attended a judo tournament, competing in both individual matches, and five-member team competitions. In the spring of 1967 Lokomotíva Košice men’s team went to Leipzig, East Germany for another judo tournament and a reciprocal tournament was held later that year in Košice. 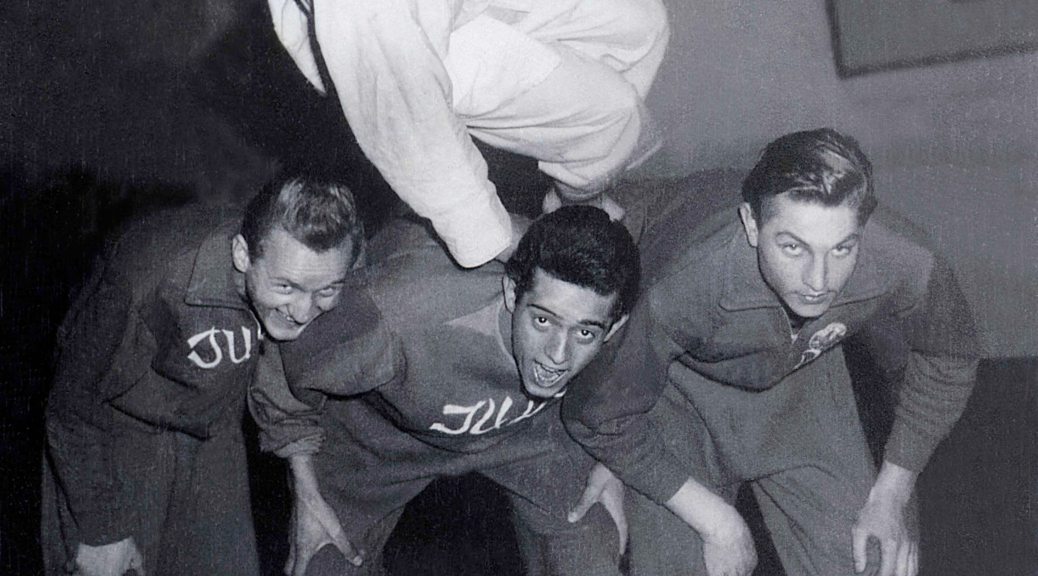 • My father, Vaclav (Vašek) Dusil started training judo in 1958, when he was 16.  His older brother started in 1959. The youngest of the three started in early 1960.  My dad and his older brother were the stars of Košice men’s judo throughout the 60’s, although his younger brother won junior regional titles in both 1961 and 1962. My uncle admitted that he was never as good as his two older brothers, but was a reasonably good coach, and a good organizer. This is one of the reasons why my dad gave him the task of coaching the women’s team in late 1961, when the previous coach, Juraj Mazanek went off to complete his military service. My uncle was also the president of the club from 1962 to 1968, and therefore took care of most of the bureaucracy.

•  In 1962, six months after my uncle took over the task of coaching the women’s team, one of the judoka, Julia Tothova won her first gold medal for Košice, at the Czechoslovakian Championships. The following year she also won gold at the the International judo tournament in Bratislava.  This event was attended by Austrian, Italian, and Czechoslovak competitors. Julia beat the reigning Austrian champion in the finals, which became a mini-public relations sensation in their home town. Košice was an eastern Slovakian town that was considered a relative backwater compared to Prague or Bratislava. It was their women’s judo team who mostly made the headlines in Košice in the 60’s. From 1962 to 1969 they won no less than 12 individual Czechoslovakian titles plus an unofficial team title. Due to their success the club also received increased funding for the whole judo team, from the Lokomotiva Kosice “brass”. My dad won a bronze medal in the Czechoslovakian Junior Championships in 1960, which according to my uncle, should be considered at least an equivalent achievement to Julia’s gold, due to the higher level of competition on the men’s side.

• A Note to the Reader

• All photos in this blog can be downloaded by just clicking on them.  The images will open in a new tab in your browser, where you can then save them to your computer.  If you want an even higher quality version (if you want a high resolution print for example) then let me know, as I have the original uncompressed Tiffs.

• If you have anecdotal information related to any photos in this blog, then please send me the details, and I would be happy to add your postscript below the photos.  Just send me an email or post your comments at the end of this blog.

• This photo was taken of the Kosice Judo team during a hike in Janosikova Basta, around 20km northwest of Košice.

• This photo was taken inside our the training facility. Juraj Bialko won the junior championship (under 18) Eastern Slovakian Regionals in 1961 together with my uncle, Ivan Spisak and Robert Pinter.  • Sano (Alexander) Drabcak worked as a waiter when the Russians invaded on the 21st of August 1968 (just before you were born). Within hours the stores were stripped of all groceries. The only items available were spirits and wine.  My uncle had nothing for his baby daughter except for sweet tea. Two days after invasion he went to Sano in desperation, and asked for liter of milk for his baby.  Sano gave him one. A week later the food supply returned to normal. Some acts of compassion are never forgotten.

• Postscript from me • 2014 October • Of the judo photos that I have restored so far, this is my favorite.  It’s my dad in action, so-to-speak.  I love his expression, together with Vojtech’s reaction, just as my dad leaps over his back. The press photographer captured the moment perfectly.

• This photo taken inside the judo training facility.  Miro Brozek was the president of the men’s judo club for many years after we emigrated to Canada in 1969.  Miro was also one of the many attendees to Csaba Kende’s 80th birthday. The men and women’s teams separated as part of Csaba Kende’s reorganisation of the club in the early 1970’s. Jozko frequently visited my dad frequently during our early years in Canada.

• Berco Allman won gold in heavy weight (80+ kg) and Joe Nalevanko won gold in light weight for Slavia Košice (-63kg). Robert Dusil won gold in middle weight (-80kg), Vašek Dusil won gold in welter weight (-70kg), for Lokomotíva Košice. This photo was taken in front of the building which housed a room with soft wrestling mats. This is where the judoka (Judo students) also trained. The building was torn down many years ago.

• Postscript from me • 2014 October • Growing up I saw my dad’s medals, displayed on the wall, on a purple velvet covered plaque. I remember asking him one day, what his medals were for – I must have been six or seven years old.  He told me that he won them in judo competitions.  But he didn’t say much more than that.  Only 40 years later can I truly appreciate my dad’s accomplishments.