The strength of traditional martial arts lies in hundreds of years of its tradition. By design, this also reveals their weakness. Students learn a traditional martial art today, similar to a student 100 years ago. Many schools are static in this regard. As such, they have little latitude to evolve. Their focus prefers tradition over the evolution of fighting effectiveness.  Their martial art may be a single spoke on the expertise wheel, but when exposed to other styles, their effectiveness is often invalidated.

Before the dawn of UFC in 1993, and MMA in general, traditional schools taught a false sense of security. One discipline claimed superiority over another, but there was no platform to prove it. Tournaments focused on specific styles – Taekwondo, Karate, Kung Fu, Wrestling, Boxing, etc. Each style was only tested within the bounds of its style. A practitioner may dominate in one style but crumble in circumstances where their rules are not honored.  For example, it was recently mentioned on Joe Rogan’s podcast that a student training one year of boxing will dominate an opponent training a lifetime in Karate. In addition, testing a single martial art on a good street fighter is a risky business and very dangerous.

Certain Martial arts such as Brazilian jujitsu (BJJ) and Krav Maga had been tested in realistic combat situations; BJJ on the streets of Brazil, and Krav Maga by the Isreali military and their defense forces. Krav Maga specifically trains for real-world hand to hand combat whereby BJJ excels in submission techniques that have the devastating potential of break arms, legs or submits the opponent to sleep. The difference is that Krav Maga is more lethal in its design.

Enter Mixed Martial Arts (MMA), born in part from Brazilian Jui Jitsu (BJJ), wrestling, Muay Thai and Boxing, and popularised by the UFC’s launch in November 1993. MMA central purpose was to adopt the best techniques from most effective styles and their best practices. This evolving martial art combines the eight strikes of Muay Thai, the movement of a boxer, take-downs from Judo, grappling from wrestling, and submissions from BJJ. The elegance of MMA is that there is no right or wrong answer.

MMA strength lies in an evolving discipline whereby
new techniques are tried and tested for their effectiveness.

Many styles have been obsoleted by MMA’s evolution. For example, Taekwondo, Karate, Kung Fu, Tai Chi, and other traditional martial arts have proven ineffective against an MMA opponent. Although traditional clubs offer valuable training to young students seeking disciple, strength, and conditioning, these disciplines represent only one spoke on the wheel of combat expertise. A student wanting to expand their horizons in the field of combat must open their doors to multiple disciplines.

MMA is an evolving sport, meaning that any given technique is not necessarily right or wrong. Today’s techniques are not black and white in their effectiveness, but a grayscale that is striving for perfection.

A martial arts student may say, “I don’t understand your approach to this technique – I was taught to do it a different way”. They are influenced by their previous teachings, and they have not been exposed to the wider horizons of combat training. A good instructor would listen to the student’s perspective, and rather than say it is wrong, he or she would try to understand the context of why it was taught that way, and explain why their approach is superior. Moreover, in rare circumstances, a confident and progressive teacher may adopt the student’s approach as an evolution of that technique. In this way, MMA is a representation of both science and art. Its artistry is maneuvering the body in creative ways to defend and attack. MMA science is practicing the “rule” until a better one supersedes it.  It doesn’t mean the older technique was wrong. It just means the newer one is incrementally better. 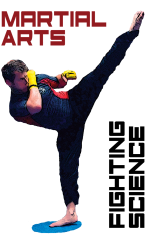 Check out my professional blog: “Digital Video for a Digital Generation” at http://dusil.com